skip to main | skip to sidebar

This is the face I woke up to this morning!  This is Abby.  And I thought a little loose tooth gave me the heebie jeebies.  Cripes, this just about sent me over the moon.  This is the result of a bug bite yesterday on her cheek.


One scared little girl who could not see out of her right eye and one really freaked out momma. 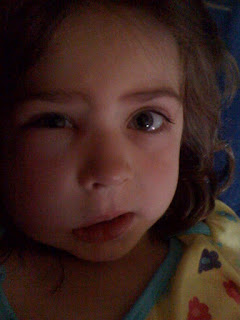 In the end, after a visit to the doctor, three medications and missing school-she still has a smile on her face.  Hopefully within a day or two the swelling will be down and back to normal.....
and my heart will resume it's normal rhythm. 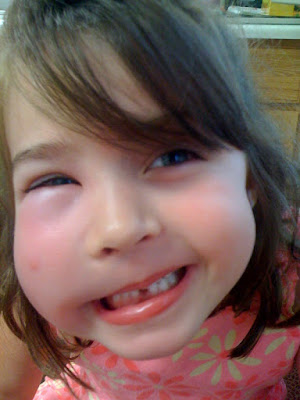 The tooth fairy finally comes to our house! 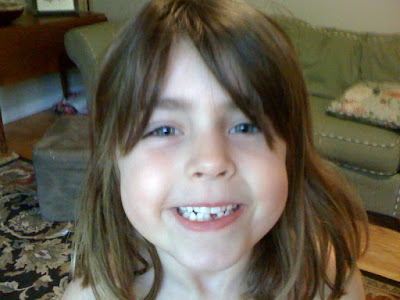 Not the most flattering picture, but the tooth fairy finally came to our house.  Abby was thrilled, but the whole process was a bit unerving for me.  First just seeing the tooth wiggle in her mouth gave me the creepy crawlies.  Second the tooth fell out during dinner while eating pizza.  And third -there was A LOT of blood.  There is something that happens to the inner core of my body when:  1.  I see my children get hurt   2.  I see blood on my children, coming from my children, near my children, etc.  Shivers down my spine.    Abby assured me it did not hurt and the dirty look my husband gave me assured me I better keep all the drama to myself!
In the end the tooth fairy remembered to put the dollar bill under the pillow that night and Abby was happy to wake up in the morning to discover money for ice cream!
Posted by Into Ablivia at 1:48 PM 3 comments: 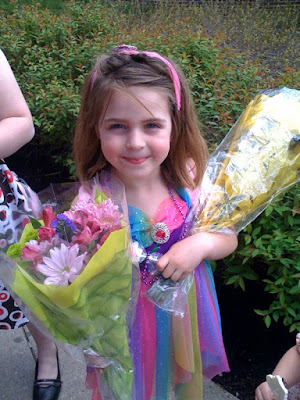 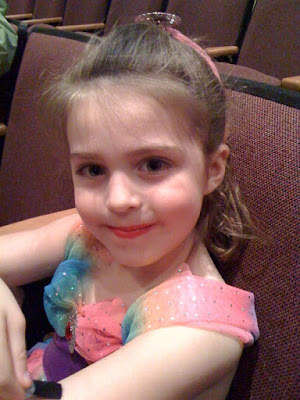 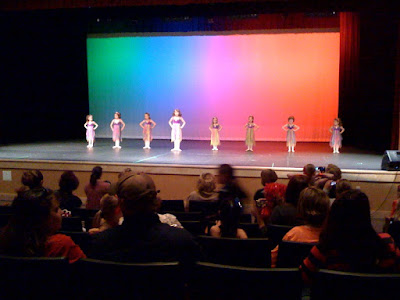 and we always need cake to celebrate-
even if they have shifty eyes!! 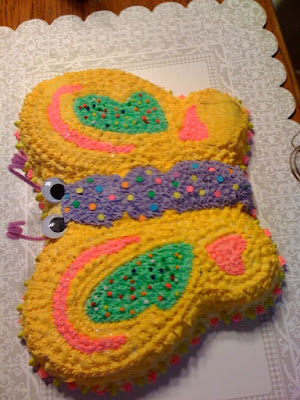 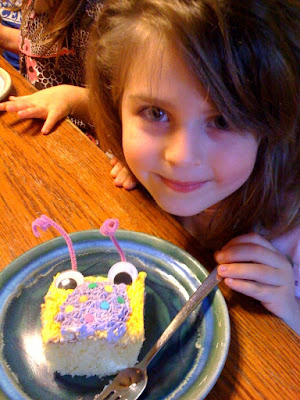 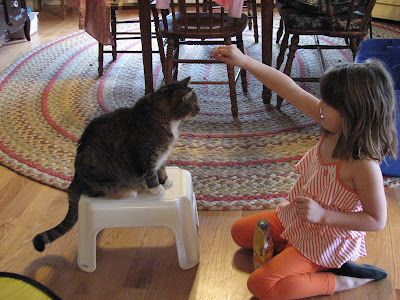 What my kids see: 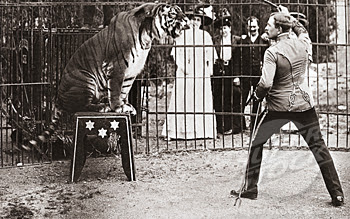 Happy Friday!
Posted by Into Ablivia at 8:00 AM 2 comments: 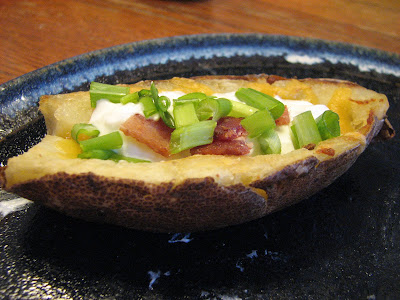 I had a hard time keeping the nice shape of the potato-but they were still very yummy!  They could be veggie potato skins without the bacon, but that wouldn't be any fun.  They were so good I forget what I served them with last week.  They actually could be a really good meal with a salad on the side.
Potato Skins

Taken from The Pioneer Woman Cooks

Preheat the oven to 400 F
Rub the outside of the scrubbed potatoes with canola oil. Place on foil lined baking sheet and bake for 45 minutes to an hour or until the potatoes are fork tender. Let potatoes cool so they are easy to handle. Slice in half lengthwise.  (I microwaved my potatoes for speed)

With a spoon or small scoop, scrape out the inner flesh of the potatoes, leaving a small margin of potato in the skins. Brush both sides of the potato skins with canola oil and salt liberally. Place the skins cut side down on the pan and return to the oven. Bake for 7 minutes and then flip the skins over to the other side. Bake for 7 minutes more or until the skins are crispy.
Meanwhile, cook the bacon in a skillet and chop into small bits. Set aside. Grate the cheese if you haven’t already.
When the skins are crisp, remove them from the oven and sprinkle each with cheese and bacon pieces. Return to the oven just until the cheese melts (2 minutes). Just before serving, spoon sour cream onto each skin and sprinkle with sliced green onion. Serve piping hot.

Posted by Into Ablivia at 2:02 PM No comments:

The garden is planted!

With this run of good weather we have had lately we finally got the garden planted.  Well, basically anything that could still withstand the chilly nights.  The rest is being started from seed and are on the heating mats in the sun room.  Which as I type I am remembering I really should go water them.


We (or really my husband that is) always keep track of what we plant in our blue binder.  Just to make sure we rotate the plants around the garden from year to year and also instructions on care and harvesting. 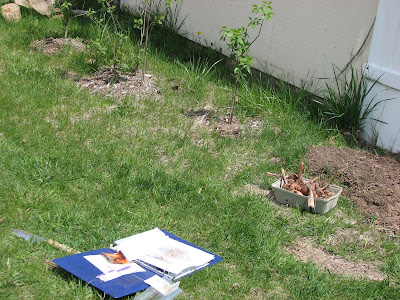 I had lots of help as usual, here we see my shortest assistant in blue with her free planting technique.  Similar to free range chickens.  The seeds get to go wherever they want.  Who knows what will come up? 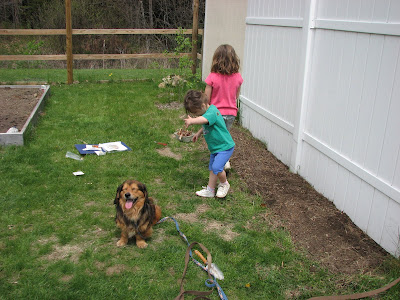 Lots of love goes into planting a garden too.  and one very tolerant dog, who seems to be enjoying himself! 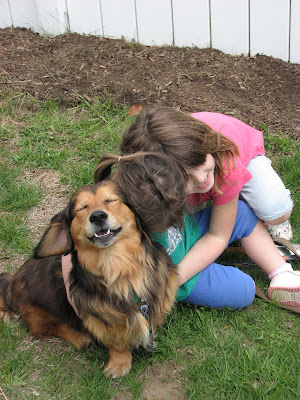 Back to the garden.  The garlic is coming in nicely.  The peas, pumpkins and cukes are planted.  Tomatoes, beans, basil, summer squash, zucchini, watermelon and acorn squash are started in the sun room.  Still need to purchase kale and swiss chard seeds.  Those will be new items for our garden this year. 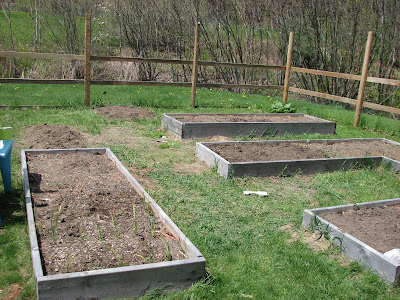 Flower hill has been planted once again.    The girls picked sunflowers and Nasturtium's this year. 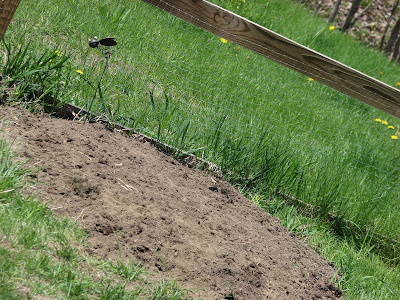 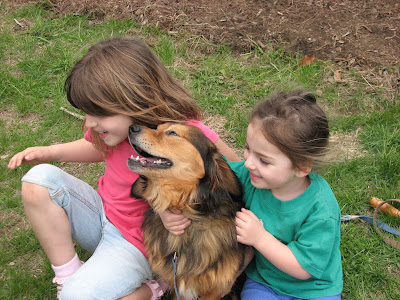 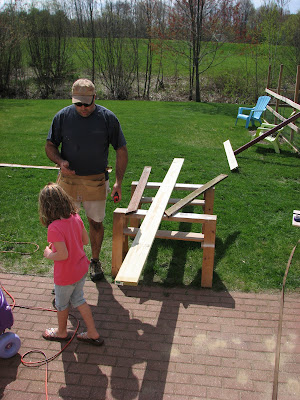 I hope everyone had a nice Mother's Day last weekend.  I got exactly mostly what I wanted and then some.  I had asked the kids to tell Daddy I wanted:  to sleep in late, breakfast in bed and snuggles from the kids.  When my husband asked them later what mommy wanted for Mother's Day-they both said "nothing"??   Hmm, plan B.  Tell Daddy himself.

So I did get to sleep in late, I got my diet coke delivered to my bedside (my caffeine of choice for early mornings), lots of snuggles, beautiful cards and scribbles and this gorgeous necklace from Coliwog Designs.    A local stay at home mom/jewelry designer. 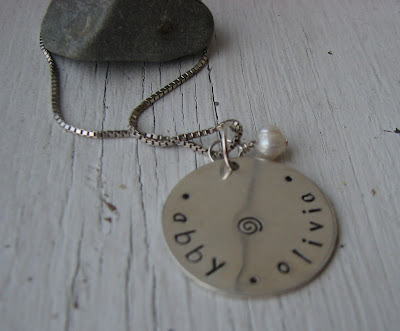 I did get breakfast-pancakes and bacon, but not in bed.  My 3 year old informed me I was too messy to have breakfast in bed.
Posted by Into Ablivia at 2:19 PM 1 comment:

Hershey has been with us a few weeks now.  He is learning the ins and outs of the household.  Rule number one that he has learned is that Plumpy the cat is number one and he is number two.  The end.
Err, Hullo, somebody sleepin' on my bed mommy? 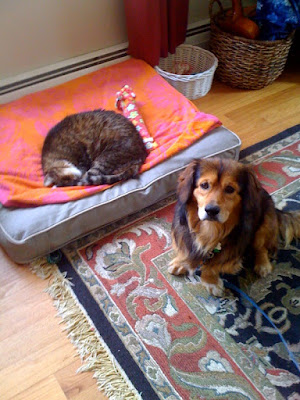 Is this how a doggie bed works? 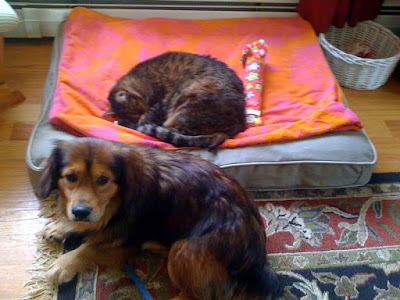 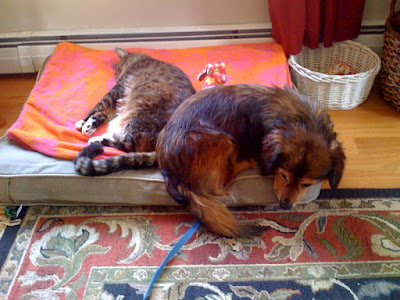 Notice how the cat hasn't even opened an eye throughout this whole process.  This isn't his first dog and pony show.  At 14 years old he has seen them come and go.  And nobody is going to kick him out of the cushiest spot in the house.
Posted by Into Ablivia at 2:37 PM No comments:

Could Spring finally be here?  It is raining today, but at least I feel like I don't need to start the wood stove.


The rhubarb is coming back nicely this year! 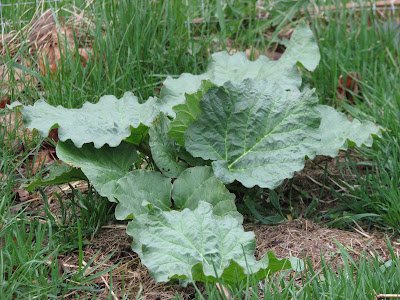 The Marsh Marigold came back too.  Hopefully this will continue to spread along the banks of the little stream we have in our back yard.  Last year we had a frog take up residence under the leaves!  We would sneak up to take a peek, it would hop out sky high and the girls and I would run screaming in the other direction. 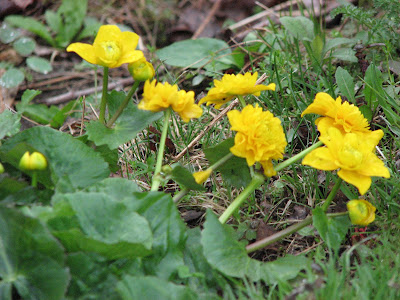 Forsythia in full bloom.  I love looking out my window to see this bright yellow! 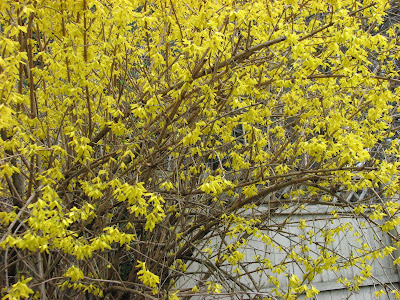 Spring garlic is coming along nicely.  We still need to plant all our other veggies.  Hopefully that will be one of the Mother's Day tasks! 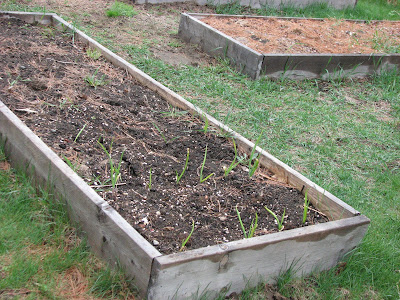 Cleaning out the freezer... Zucchini Cake.

Summer is fast approaching and soon it will be time to pick strawberries, blueberries, raspberries, cherries, and all the veggies the garden has to offer.   In my freezer I still have fruit and veggies left from last year and I am on a mission to use them.   I had a big bag of frozen shredded zucchini and instead of making the same ol same ol zucchini bread I decided to make Chocolate Zucchini cake!  Next on my list is a large blueberry breakfast cake to deliver to the school for Teacher Appreciation week and my husband making more strawberry jam. 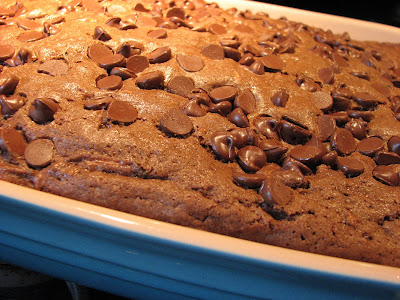 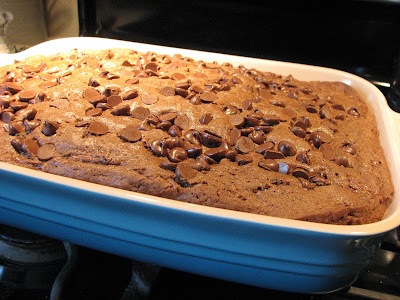 1 stick butter
1/2 cup cooking oil
2 eggs
1 tsp vanilla
1/2 cup buttermilk (If you don't have buttermilk just add a splash of white vinegar and let set for a few mins-works perfect.  I never have buttermilk on hand and always use this method)
2  1/2 cups flour
1 3/4 cups sugar
1 tsp baking soda
1/2 tsp baking powder
5 Tbls cocoa
1 tsp cinnamon
2 cups grated zucchini
1/2 choc chips
Preheat oven to 325.  Cream butter with sugar and oil.  Beat in eggs one at a time.  Add vanilla and buttermilk and mix well.  Sift together dry ingredients and add gradually to creamed mixture.  Stir in zucchini.  Pour mixture into greased 9 x 13 pan.  Sprinkle choc chips on top.  Bake for 45 minutes.
Next time I will probably add in more choc chips to the batter!!
Posted by Into Ablivia at 2:31 PM 1 comment:

Into Ablivia
My daughter’s names are Abby and Olivia and together you get Ablivia. And trust me most days I wonder how they really can be so oblivious! I am starting this blog b/c my friends thought I should and I thought it would be a great way to share ideas, fun websites and pictures! Nobody really cares what I am doing on a day to day basis (heck I bore myself), well maybe my mom will at least read.